With only the District of Colombia left to vote, the 2016 Democratic presidential primary is all but over.

Since summer of 2015, the Federal Bureau of Investigation (FBI) has been investigating former Secretary of State Hillary Clinton’s exclusive use of a private email server for all of her government duties during her tenure at the State Department. This successfully hacked server contained Top Secret and above born-classified material, years after she left government.

Clinton claimed that her use of a private email server was above-board, consistent with the rules, and not illegal. The State Department Inspector General’s (IG) report proved that these were lies but the IG has no authority to determine whether what she did was legal or not.

Bernie Sanders famously gave Clinton a pass on her damn emails in October 2015 because he wanted an issues-oriented campaign rather than a scandal-filled shit show, but with the Clintons, the scandals and shit shows are inescapable. Similarly,  the FBI gave a Clinton a pass on the timing of her interview until the primary was all but over.

To protect the integrity of the investigation from politicization and to keep the agency as far as possible away from the vicissitudes of a presidential campaign even as it quietly investigated the campaign’s front-runner.

In different ways, Sanders and the FBI were doing the same thing — putting country first.

With voting and caucusing behind us, the FBI can finally interview Clinton. Interviewing the target of an investigation is the last stage of the investigative process after all the facts have been established through forensics and the collection of statements by witnesses (or in this case, conspirators); that way, perjury charges can be filed if the target lies to federal agents which gives prosecutors additional leverage they can use to extract plea bargains from defendants. That’s what happened to General David Petraeus, President Obama’s former Central Intelligence Agency director.

Once Clinton’s interview is completed, the FBI will recommend to the Department of Justice (DOJ) what criminal charges, if any, should be filed and the final decision whether or not to indict Clinton rests with the head of the DOJ, Attorney General Loretta Lynch.

Will there be an indictment? Dan Metcalfe thinks an indictment is all but certain and he is far from being either a Bernie bro or a right-wing nutjob. His byline reads:

“Dan Metcalfe is a registered Democrat who has long said that he will vote for Hillary Clinton in November ‘if she escapes indictment and manages to become the Democratic presidential nominee.’ He served as Director of the Justice Department’s Office of Information and Privacy for more than 25 years, during which time he handled information-disclosure policy issues on the dozens of Clinton Administration scandals that arose within public view, as well as two that did not. Since retiring in 2007, he has taught secrecy law at American University’s Washington College of Law.”

Of course no one can say for sure whether Clinton will be indicted, but if it happens, then what?

First, Clinton will resist pressure to drop out. Whereas Sanders and the FBI put country first, the Clintons always put the Clintons first. This is the central problem with fantasy scenarios dreamed up by establishment liberals like Metcalfe and Douglas Schoen in which the Democratic establishment parachutes Joe Biden, John Kerry(!), or Elizabeth Warren in to Clinton’s slot at the convention in Philadelphia. 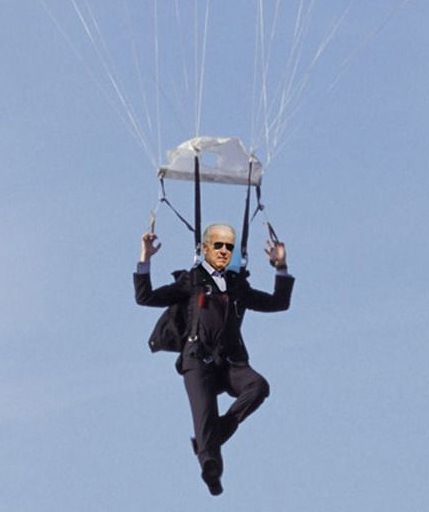 Second, the timing of an indictment would be critical. As Fox News reported:

“Blakeman [a member of President George W. Bush’s White House Senior Staff] says the FBI has deliberately waited to interview Hillary Clinton until after the primaries because the bureau did not want to interfere with the nominating process. He thinks the FBI is ‘likely’ to recommend to the Department of Justice whether or not she should be indicted for violating what she says are agency rules and what others call the law between now and the Democratic National Convention in Philadelphia, which begins July 25.

“If she is indicted before the convention, Blakeman says, it will give the party an opportunity to make changes in the rules that could result in an alternate nominee.

“Here is the intriguing part about Blakeman’s scenario: ‘If a grand jury is empaneled, or if she were to be indicted before the convention, the Democrats would have to let her go.’ If an indictment were to come after the convention, he says, it presents a different problem because each state needs to certify their ballots before November. If an indictment occurs after the states have certified their ballots, it would be nearly impossible to replace Hillary Clinton with another candidate.

“Here’s where things might get even more interesting. In states where ballots have been certified, the party would have to go to court to ask that Clinton’s name be replaced. ‘They also have another problem,’ says Blakeman. ‘Once the convention ends, how do they reconvene to substitute Hillary? They have no rules for that.’

“What if a court denies a ballot change? Blakeman says the Supreme Court would almost certainly have to decide. That might look to many like a replay of the 2000 election in which the court certified Florida’s vote count, awarding the state’s electoral votes — and the election — to George W. Bush.

“But what if the court — with its one vacancy — divides 4-4? In that case, the lower court ruling would prevail and if that court decided to strike Hillary Clinton’s name from the ballot, a write-in would be the only option.”

This is incorrect — the Democratic Party does have post-convention rules to pick a new nominee:

“Filling a Vacancy on the National Ticket:

Creating a vacancy after the convention anoints Clinton requires her to resign as the nominee.

Although the head of the Democratic National Committee (DNC) Debbie Wasserman-Schulz is totally hostile to Sanders (and vice-versa), picking anyone other than Sanders to fill the vacancy created by Clinton’s indictment would be a difficult sell politically. This is true even if the DNC selected Clinton’s choice for Vice President since that person would only have 1 vote — Clinton’s — compared to Sanders’ over 10 million votes. Furthermore,  the post-convention DNC’s political complexion will probably be more favorable to Sanders than it is currently. On the other hand, Sanders’ leverage over the DNC will decline after the convention as his supporters become demoralized by defeat and his grassroots fund-raising machine shuts down.

Clearly the best case scenario for Sanders is if Clinton is indicted before the convention. Any attempt by the Democratic establishment to slip Biden or Warren in to Clinton’s place at convention could work theoretically even if Clinton refused to drop out since pledged delegates — like electors in the Electoral College — are not legally obligated to vote for the candidate they are pledged to support. But according to the rules, there are procedural hurdles such an effort would have to overcome:

“Nomination of the Democratic Candidate for President:

“The Permanent Chair shall receive nominations from the floor for the Democratic candidate for the Office of President of the United States in the following manner:

“a. Requests to nominate a presidential candidate shall be in writing and shall have affixed thereto the written approval of the proposed nominee and the name of the individuals who shall be recognized to make the nominating and seconding speeches on behalf of a presidential candidate and shall be delivered to the Convention Secretary at a location as specified by the Secretary no later than 6:00 p.m. of the day preceding the day designated for the commencement of presidential nominations.

“b. Each such request must be accompanied by a petition indicating support for the proposed nominee signed by delegates representing not less than 300 or more than 600 delegate votes, not more than 50 of which may come from one (1) delegation. A delegate may not sign more than one (1) nominating petition for president and for vice president.”

If Clinton were to continue her quest for the presidency despite being indicted and the Democratic establishment tried to nominate someone else in her place, at least 300 of her delegates (superdelegates and/or pledged delegates) from at least six states would have to break ranks and rally around a new candidate. Then, these establishment renegades would have to fight on the convention floor against not only an army of Clinton loyalists but also over 1,500 Sanders delegates and 20,000 or more Sanders supporters rallying outside the convention. The 1968 Democratic convention in Chicago look orderly by comparison.

Again, timing is critical and Blakeman is right that ballot access could be a problem if an indictment happens in October or on the eve of the general election. A presidential election can be rescheduled by an act of Congress but the likelihood of a Republican House and Senate taking such an extraordinary step to help the Democratic Party win the presidency is exactly zero.

An indictment of Clinton after winning the November general election would be the worst-case scenario because it would cause a full-blown constitutional crisis. Perhaps Obama would pardon her to pre-empt her from pardoning herself, although tarnishing his  legacy to save Clinton from the consequences of her own mistakes is hardly a prospect he would relish.

Learn More about the Scandal

7 thoughts on “What Happens If/When Clinton Loses the FBI Primary?”