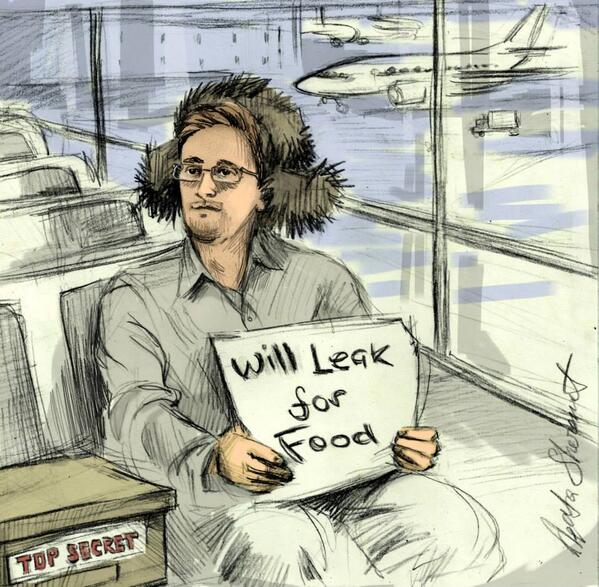 After exposing Donald Trump military advisor Gen. Michael Flynn’s payments from the Kremlin, investigative journalist Michael Isikoff has published a lengthy piece exploring the question of how Edward Snowden makes money while hiding out in Moscow from U.S. authorities. By defecting to Moscow, Snowden gave up his $200,000-a-year job as a contractor at the National Security Agency doing low-level IT support and quickly used up his savings which makes sense since in 2013-2014 Moscow was one of the world’s most expensive cities to live in:

“Snowden claimed that he withdrew ‘enough financial resources to survive on my own for years without anyone’s assistance’ before leaving the United States with classified documents. Nevertheless, while settling into asylum, the former systems administrator accepted a job at a major Russian website, according to his Russian lawyer Anatoly Kucherena. And by November 2013, the American was reportedly almost broke. ‘The savings he had, he has almost entirely spent on food, rent, security and so on,’ Kucherena told the Russian newspaper Rossiiskaya Gazeta. As of February 2015, according to Kucherena, Snowden was ‘still working for a Russian company.’

“But by mid-2015, according to Wizner, speaking fees that sometimes exceeded $10,000 were his primary source of income.”

Snowden’s day job is supposedly at an unnamed Russian website where he performs site maintenance according to his lawyer, Kucherena (who by the way is tied to the Russian government’s Federal Security Bureau [FSB]). Although the identity of Snowden’s employer remains a closely guarded secret, given that the average Muscovite makes something like $1,200 a month ($14,400 a year), it’s safe to say Snowden’s new job probably pays him nowhere near the $200,000 a year he was making as a private contractor at the NSA.

The FSB is ruthless, not generous.

Snowden told audiences and fellow panelists that he would donate some of his speaking fees to the Freedom of the Press Foundation where he is a board member. But Isikoff discovered that Snowden never donated a dime:

“Trevor Timm, president of the Freedom of the Press Foundation, told Yahoo News that the organization never received any direct donations from Snowden as a result of the Colorado talk or any other of his speaking appearances. On a ‘handful of occasions,’ Timm said, Snowden has forfeited speaking fees and directed that they go to the group, estimating that the organization has received between $10,000 and $20,000 this year under such arrangements. But, he added in an email, ‘there have been no direct donations from Snowden to Freedom of the Press Foundation.’”

Journalist Ron Suskind agreed to appear with Snowden at a joint event put on by the University of Colorado in which part of Snowden’s $56,000 fee was supposed to go to the Freedom of the Press Foundation. Isikoff reports:

“If Snowden did not actually make the contribution to the Freedom of the Press foundation for the Colorado talk, then ‘I would be disappointed and surprised,’ Suskind said in an interview.”

This is surprising only to dupes taken in by the propaganda campaign surrounding Snowden as some kind of brave truth-teller when closer examination of the evidence reveals just the opposite.

What is surprising is that the that payments from U.S. universities — some of them public — to Snowden appear to be legal because the Treasury Department has not designated him under an executive order by the Obama administration sanctioning hackers as a threat to national security.

What’s worse is that taxpayer dollars have continued to find their way into Snowden’s bank account thanks to the University of Iowa, the University of Colorado, and the University of Arizona even after he stole 900,000 Department of Defense documents that had nothing to do with domestic spying by the NSA and publicly revealed sources and methods, helping Islamic State terrorists hide plots like the Bataclan massacre from law enforcement agencies. Hopefully Isikoff’s reporting puts an end to that aspect of this scandal.

8 thoughts on “How Russia’s Agent Snowden Pays the Bills”