The way Bernie Sanders is mishandling the endgame of his 2016 presidential campaign is almost criminal.

First, he promised after losing the California primary to press on, to continue fighting for the nomination all the way to the convention floor in Philadelphia. Then he unexpectedly reversed himself and endorsed Hillary Clinton at a joint event in New Hampshire just before the convention but at the same time did not suspend his campaign. Now he has been reduced to pleading to his own delegates via text message not to boo and jeer during Clinton’s coronation.

People would not be so mad if they were not so badly misled by Sanders about what to expect going into and coming out of the convention; the notion that hundreds or thousands of his supporters boo him to his face loudly and repeatedly was unthinkable just one or two months ago. The flames of discontent were certainly fanned by the Russian government’s theft and publication via its Wikileaks subsidiary of damning emails proving that the Democratic National Committee was biased against Sanders and for Clinton, but that discontent smoldered throughout the primary and caucus process in the form of conspiracy theories about massive and systematic infiltration of the Sanders campaign by Clinton operatives, in frivolous lawsuits filed in California and New York, and in ubiquitous claims of voter disenfranchisement and electoral fraud.

All of that steadily mounting discontent — generated in opposition to fundamentally unfair and anti-democratic political and economic systems — reached a breaking point and is spilling out into the streets of Philadelphia and into the convention hall. 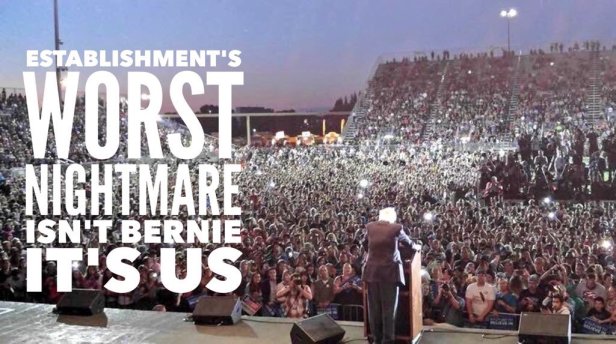 Thus far, Sanders has done a piss-poor job of managing this unsophisticated but just outrage. At one point, he talked down to his supporters by lecturing them that “this is the real world” — yes, people with over $50,000 or more in student debt or who had to beg for money via GoFundMe pages so that they could afford to attend the convention are living in a fantasy world, right Bernie? Comedian Sarah Silverman piled on by castigating the #BernieOrBust tendency as “ridiculous.” At least Jane Sanders is aware of the ‘yooj’ disconnect between Sanders and his delegates since she whispered to him that they were unaware that there would indeed be a roll-call vote on the convention floor where they could finally cast their votes as delegates.

All of these mistakes were avoidable and some of them — like failing to notify supporters of the roll-call vote — inexcusable.

Probably the worst mistake Sanders made during his prime time speech and at the convention generally is failing to relentlessly promote the successor organization to his presidential campaign, Our Revolution. That would at least give furious Sanders supporters an organizational vehicle and a practical activity to channel their anger into. As the 27-year-old head of Our Revolution and veteran Sanders staffer Shannon Jackson put it:

“I think it’s important to recognize how, not just the senator, but everyone who’s been a part of this movement wants something real to come next. We really don’t want to have any lull. We want to keep this going.”

So don’t mourn the end of the Sanders campaign, organize! Join Our Revolution and send your $27 there, not to Hillary Clinton.